The bicentennial programming and event theme for December is religion. Rev. Dr. Claude A Bass and Dr. Ray Van Neste will speak on the past, present and future of religion in Jackson and Madison County.

As this is a catered event, advance tickets are required for attendance. The cut-off for purchase is 6 p.m. the Tuesday prior to the event. Tickets will not be sold at the door. Tickets are $12 per person and can be purchased using a debit or credit card at fffdec2021.pushpayevents.com 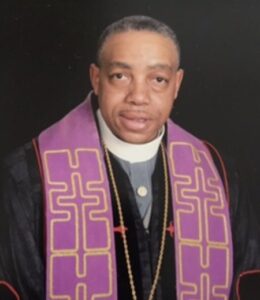 About Claude A. Bass

Rev. Dr. Claude Bass was called to preach at an early age in 1973 at Lewis Metropolitan CME Church in Los Angele, California.

Dr. Bass completed high school at Oakland Technical High School of Oakland, California. He attended Texas College in Tyler, Texas then transferred to Miles College of Birmingham, Alabama where he graduated with a Bachelor of Arts in Social Science. Dr. Bass received his Master of Divinity, from the Phillips School of Theology at the Interdenominational Theological Center of Atlanta, Georgia. He later received a Doctor of Divinity from Union Baptist Theological Seminary.

Pastor Bass has been involved in and served in many Church and Civic organizations in many capacities of Leadership. Pastor Bass has pastored churches in the state of Texas, Alabama, Georgia, California, Ohio, and Michigan. He is presently the senior pastor of St. Paul CME Church of Jackson, Tennessee, Lane College Campus Church. He is also the presiding elder of the Southwest District of the East Tennessee Region.

He is married to Annie Clivestine Snow Bass. He has four children and three grandchildren.

Pastor Bass loves the Lord, his family, and the church and believes the church should follow the leadership of Jesus Christ of what he calls the Galilean Ministry of Jesus Christ: Teaching, Preaching, Healing, taken from Matthew 4:23.

Ray Van Neste has served at Union University since 2001, and also served as a visiting lecturer 1997-98. He has published numerous books and scholarly essays on topics such as biblical studies, pastoral ministry, and church history. An ordained minister, Ray preaches and teaches regularly in local churches and has served in pastoral or other staff roles in Baptist congregations in Tennessee, Wisconsin, and Scotland.

Ray serves on the editorial board of the Southeastern Theological Review and on the Board of Reference for Eagle Projects International, a missions organization. He helped to start and currently leads the study group on the Pastoral Epistles in the Evangelical Theological Society. He manages the website, pastoralepistles.com, which reports on the work of this study group and other research related to the Pastoral Epistles.

Ray and his wife, Tammie, met while they were students at Union and married just as they finished classes. They have six children, and the four oldest are graduates or current students at Union. While pastoring in Wisconsin, Ray and the rest of the family got caught up in Packer-mania and have been Green Bay fans ever since. The Van Nestes are members of First Baptist Church of Jackson, TN.